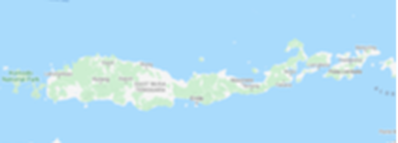 Manggarai Culture and Regencies
The Ethnic group you find is western Flores, is referred to as Manggarai. They are local to the East Nusa Tenggara province in Indonesia. You can find the Manggarai people in the three different regencies of West Manggarai, Manggarai Regency, and East Manggarai Regency.

Religion
When if comes to Religion, more than 90% of the Manggarai People are Catholics, and most of the rest of the population follow Sunni Islam, which is by far the largest branch of Islam. The Islamic Population (approximately 34,000 people) is a bit higher to the West, which has migrated because of the fishing trade. If you move towards the more central part of the island, you can find more traditional beliefs of Mori Karaeng, which is a form of ancestral worship, as well as ritual dances and battles between two parties of men in traditional clothing. Typically the more central of the island you find a mix of Catholicism and traditional Religion mixed into one. Many attend Sunday church but still practice all of the traditional ways as well.

Rituals
There are many rituals that are still practiced to this day in Manggarai culture such as;
- Libur Kilo - A ceremony to give thanks for the welfare of each of the family members in their homes.
- Penti Manggarai - Celebration ceremony to give thanks for the harvest.
- Wisi Loce - A ceremony for all the spirits that are invited are able to wait a moment before the peak of the Penti Ceremony.
- Barong Look - A ritual that invites the gardenia spirit to the center of the Lingko, which is the middle of the main farm area.
- Barong Wae - A ritual to invite spirts of ancestors to watch of the springs of water.
- Barong Compang - A ceremony of summoning a spirit to be the guard over the village at night.

Politics
In Manggarai culture, the political system is clan-based, led by a chief clan called Todo. This people practice a patrilineal descent system.

Income
Many locals are involved with handicrafts are such as carving, metalworking and weaving. As well as farming is a predominately source of income for families or at least a means to survive. Farmers farm crops such as rice, vegetable, tobacco, coffee, and corn. Pigs, Buffalo, and chicken are breed for food and ceremonies. Hunting is not common in Manggarai culture except some do hunt for birds at night.

Traditional Clothing
Traditional clothing consists of traditional and colourful sorongs for the men and women worn around the waist as well as many of the men wear traditional colorful hats. The sorongs and hats are worn for most of the ceremonies, but normal every day modern day clothing that you would see anywhere in Indonesia is usually worn on a daily basis.

CACI Dance
The famous war dance in Manggarai is called the Caci Dance and it features a form on Whip fighting, where one fighter jumps up and strikes the other fighter shield (man from animal hide) with a wip. This ceremony is usually featured with traditional music as well. If visiting local Villages such as Tado Traditional Village, you can possibly schedule a traditional Caci Dance.

Contact Us
Ngada Culture
We offer many options for our Flores Overland Tours if you would like to Visit any Regencies in Flores.
The total area of Ngada is around 625.84 sq mi (1,620.92 km2)
The Population is 165,254 from the 2020 Census.
Capital of Ngada - Bajawa


History
The Ngada Regency was formed in 1958, making it one of the older regencies (kabupaten) in East Nusa Tenggara.   After the regency was split into two parts in 2007 it now only has tow main ethnic groups; Bajawa and Riung.  Bajawa to the South and Ruing to the North.
Language
The most predominate language in Ngada is the Ngada Language,  but there are several other indigenous languages in the Regency based on their ethnicity. Local [eople from Bajawa, Aimere, Golewa, Jerebu'u mostly speak the same language with minor differences in the accent. The two major differences in languages are from the locals in Soa and people from Riung. These two languages are much more different than the other languages in Ngada. Considering many of the area in Flores and not communicate with each other using local language, so instead they use the Bahassa Indonesia.

Tourism.
The megalithic sites in the Ngada region were added to the  UNESCO World Heritage Tentative List on October 19, 1995 in the Cultural category, But was pulled out from the list on 2015

Ngada Regency is considered one of the more poorer regions in Indonesia but thankfully because of international tourism the economy has been slowly getting better.  The Ngada region waas added to the UNESCO world heritage List n 1995 but was pulled from the list in 2015. As far as megalithic Traditional Villages, The most visited tourism areas in Ngada are Bena and Wogo traditional Villages.  The traditional villages in Ngada are all unique megalithic complexes with traditional housing.  The other, not so well known, traditional village in Ngada are; Luba, Gurusina, Tololela, Doka, Bea, Langa, Naga, Tude, Mangulewa, Watujaji.   There are 7 original megalithic villages in Bajawa that allowed the locals to establish the area Bajawa.  Those Villages are Bajawa A, Bongiso, Bokua, Boseka, Pigasina, Boripo, & Wakomenge.

Houses in the Ngada Region play an important role in the culture.  Villagers all must belong to a house, which shows that they belong to a clan.  This is usually at great grandparents or grand parents home, or a home that the families still live in.  Wood carving in the home also play major role in the culture.  As in many cultures the, kitchen is the center of the traditional home, which generally on the family is welcomed into the kitchen.


In the Northern part of Ngada, in the Riung area, there are 17 islands located off of the north coast.  These are also becoming more popular tourists attractions as the have been made into a national park called, “17 Islands National Park.”  You can rent local boats on the beach that take tourists to the National Park.  These have beautiful beaches for sun bathing, swimming, and snorkelling.  At night, sometimes you can also see the Flying foxes.

For tourists visiting Ngada Regency, you can find info and locations of the most popular tourist locations under the attractions category on this App.  These are, Bena Village, Wolobobo, Soa Hot Springs, Wolokoro, Inierie Volcano,  & 17 Islands.

Soa Valley
The Soa Valley is more know for two things.  The beautiful Hot Springs that has also been turned in a park for guests.  The hot springs are called Mengeruga.  These is a small entry fee and there are two pools as well as a waterfall.  Soa Valley is also known for the fossils of stegodon (and animal with massive teeth) that was found in 1968. A Stegodon is one of the largest known proboscideans.


Bena Traditional Village Information.
Bena is Located only 13km south of Bajawa.  The road is fully paved and in good condition.  Bena village is the most visited of all the Ngada traditional villages.  For tourists visiting Bena Traditional Village, there is a small entrance fee. There also local crafts, such as sorongs, jewellery, and cups for purchase.
There are nine clans in Bena which live in the 45 houses.  Each clan of the Village have a main family house and other supporting houses.  When you visit you will see the jaw bones of many buffalo and pigs on the sides of each of the homes. These are from the many ceremonies over the years that have taken place in or outside of the home.  These ceremonies include, house building, 20 year ceremony, traditional new years, traditional engagements and other harvest ceremonies.  On the roofs of traditional homes you will see statues at the top, which represent the man and woman of the home. Inside the homes, there are wood traditional kitchen with carving.  The kitchens are build with 28 boards to make the square room. The 28 boards represent the woman’s monthly cycle.   In the center of Bena Village, as well as many tractional villages, there are structures that represent the man and women.  The structure that represents the woman is called a teda moda, this structure has one big opening for a window for the woman to view the children.  The structure that represents the man has a spear on top to represent hunting.
Ende Regency
Capital - Ende
Divided into four parts. - Ende Seletan, Ende Timur, Ende Tengah, & Ende Utara.
(population: 87,269 in 2020)


Ende is a coastal town that is surrounded by mountains and it is known for the location that Soekarno spend 4 years here meditating his visioned of the Republic of Indonesia and the concept of Pancasila.


History
For many Decades, Ende was the center of government, trade, education, and political activities because it was the site of a kingdom that existed around the end of the 18th century.  The people were known are Lio-Ende people.  A famous nationalist leader who later became the first President of the Republic of Indonesia was named Sukarno.  Sukarno was exiled to Ende by the Dutch colonial government from 1934 to 1938 because of his political activities were deemed a threat to the Dutch East Indies Government. While visiting Ende, you can visit the Bung Karno Museum, which is an old house that was occupied by Sukarno during his years of exile.  It is also known as “Rumah Pengasingan Soekarno” or “The House of Exile of SoeKarno.”  While staying there, we wrote and help many plays with Tonel Kelimutu Theatre Group. The museum still has furniture and different goods that was owned and used by SoeKarno. There is a well known Breadfruit tree about 700 meters from Soekarno’s house. This is where he often sat to contemplate under the tree while envisioning a united country that eventually be called Indonesia.  It was here that he claimed that is was the very spot the he came up with the concept of Pancasila.  There is also a monument to represent the birth of Pancasila, which is the state philosophy of Indonesia that was brought about by Sukarno’s political writings.  In 2013, Vice President Boediono held a ceremony to open the monument to the work of Sukarno.  To this day on June 1st every year the birth of Pancasila is commemorated every year as a national holiday.


Traditional villages
The traditional Villages in Ende Regency (Nua) are built in the Lionese architectural style. The people who live together in the Villages and homes generally come from the same ancestors. The traditions and customs are still followed today as they were in the past.   As with other traditional village on the Island of Flores, there are multiple ceremonies held throughout the year.  One of the main ceremonies in usually held in August when there is a big harvest.  Families come back to their families home in the Village and celebrate. As with many traditional village, the locals make crafts and farm.  Wologai Tradional village is located in the Ende district and is a well preserved Traditional Village.